When changing jobs, a lot of people ask:

All of these are great questions.

Since everyone’s circumstances are different, it’s worth speaking to a financial professional before making any final decisions.

In this article, we’re going to look at 5 key benefits of rolling over your 401K into an IRA.

Here is a video version of this article:

See also: The ONE big retirement mistake people make and how you can avoid it to retire happy and stress-free’

Convert a 401K to an IRA for more Investment Options

They have this plan document and the company decides where you can invest the 401K money.

They can give you a list of investments, but it’s a short list. There’s only so many sub-accounts, mutual funds or places where you can park that money.

They also all typically exist with one company. Such as vanguard, fidelity, voya, etc.

But, that’s not very diverse, is it?

If those don’t happen to be a great list of funds, you’re stuck with them anyway, because that’s what your company offers.

Another problem: what happens if you roll that 401K into the new company’s 401K and you like the list that they offer of funds but then they change it on you?

They can change it whenever they want.

You don’t have any control over that.

Whereas, if you roll it over to an IRA, you have a whole range of financial products at your fingertip. You can use all kinds of investment opportunities that are not just limited to the short list the company provides you with.

I talk to a lot of people who complain about their 401K. When you call them, you’re really just a number.

What do I mean by being just a number?

They often don’t give you great customer service.

I call to ask, “You’ve got this list of funds, which ones are best for me?”

You know what they say?

“Well, we’re not licensed to give you that kind of advice.”

That’s pretty frustrating, the communication can be really difficult and you don’t get a lot of advice or a lot of help.

You end up feeling like a number a lot of times through your old 401K.

The communication is usually less than optimal.

Whereas, if you roll it over with a local financial advisor in Rockford that you know, like or trust, you’re going have that person to go talk to.

If you’re not happy with the way things are going, you can tweak it.

You can sit down with them and understand why they had you in the plan that they did.

If you’re concerned with the way the government is spending a lot of money lately, you might wonder where taxes are heading and where they might be in the future by the time you need to pull money out for retirement.

If so, a Roth IRA might be a great option for you.

Just keep in mind you can only convert to a Roth IRA from a traditional IRA (unless your company happens to offer a Roth 401K program).

Getting the money out of the 401K and into an IRA gives you a lot more freedom as far as your Roth conversion options.

You don’t even have to convert the entire thing, you can convert one little piece at a time.

See also: Backdoor Roth IRA: What is it? How does it work?

Simply because those are the rules on a 401K plan.

If you pull any money out prior to your retirement, there’s a 20% mandatory withholding that has to go to the government.

The only way you’re going to see that money again is during tax time if you can prove that you didn’t owe that much tax.

Well then in next April, you can then apply to get that money back from the government.

That’s putting all the problems on you, right?

Whereas if you had rolled it over to an IRA, there is no 20% mandatory withholding.

You can bypass that whole rule.

It’s a nice little workaround if your goal is to pull money out before you retire without having to send up a bunch of money mandatorily to the government.

A lot of 401K plans are set up so that when you pass away, all the taxes on that 401K plan become due.

That’s because the whole plan gets liquidated.

The 401K company likes to move on, they don’t want to hold onto money when you’re gone.

They have written into the plan that you have to liquidate the 401K upon passing.

If you roll it over to an IRA, there are different rules.

The newest rules allow your beneficiary to stretch out that payment over a 10 year period.

So if you have a significant chunk of money in there, you’re saving the beneficiary a lot of taxes instead of taking it all at once.

Those are the key reasons to roll your 401K into an IRA.

Here’s a couple of other things to consider:

By the way, if you’re nearing retirement and you want to learn how to avoid one big mistake that can really mess you up in retirement, and instead retire stress-free, check out this video that I recorded here.

Check Out Our FREE Educational Video… 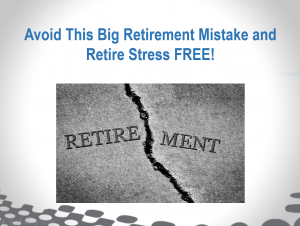